Guaranteed Success for the Lazy Procrastinator

You’ve been lied to your entire life.  As a kid, your teachers warned you against procrastinating and your parents constantly nagged about your laziness.  And if you’ve had any kind of adult relationship, you’ve probably been condemned for both repeatedly (and make no mistake, you’ve probably done your own fair share of condemning your partner, too!).  But these lies have gone on far too long, and I feel compelled to set the record straight:  There is nothing wrong with procrastination or laziness…

If you don’t know me, allow me to paint a down and dirty meet-the-author picture for you:  I proudly considered myself to be a couch potato for the first 30 years of my life; used to make residential dwelling decisions based on proximity to Taco Bell; and married the most freakishly tidy and let’s-accomplish-everything-on-our-day-off guitarist rock star in the world.

I now consider myself to be a “reformed couch potato” as I have gotten my health on track and–albeit with great reluctance, constant reminding, and casual whining–become a vastly more considerate “roommate” to my darling better half (though I still don’t iron and am not even allowed to make the bed due to my inability to form an approved “hospital corner”–whatever that is).

On the other hand, I don’t want to paint myself as a loser; I was simply focused on things I found to be more important in life, such as fast-tracking my career as a highly paid marketing executive and my pending patent on “couch potato chip sit-ups”.

(Yes, the career paid off, and no, I didn’t really try to patent anything, but I did perfect the physical art form of carefully balancing a bowl of salty snacks on my knees while performing the perfect abdominal crunch to reward myself at the top of each delicious sit-up. Eat your heart out, Chuck Norris.)

My point? I am no stranger to laziness and procrastination. I was blessed with a super-fast metabolism that kept the chalupa pounds off (thanks, mom!) but was cursed with a genetic predisposition for high cholesterol (thanks, dad!) and was shocked to learn that eating terribly and avoiding exercise had produced a very unhealthy 30-year old who was in need of reform.  And while “work Jenni” was high-powered, focused, and ready to tackle any to-do list thrown at her in the corporate environment, “home Jenni” had developed some very, VERY bad habits that were taking their toll in a measurable way.  So I decided to “shape up”.

I joined a gym in 2010 and ran in a few small races, like the Disney Wine & Dine and the Columbia Muddy Buddy, for “fun”.  (I found the post-race beer to be “fun” but I’m not sure how much I enjoyed the huffing and puffing, though I often pictured the other race participants in my head as large, floating Cheetos as they passed me by, which made the trek easier to endure). 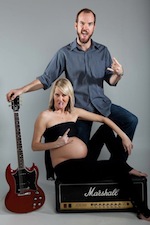 My husband and I began eating organic foods in July 2011, and found out the following month that we were pregnant with our first little one.  (Preggo rock star picture to the right provided courtesy of one very talented Mr. Tim Rowans). Five months later, I lost my job, kissed the corporate rat race goodbye, and decided to work from home building a Beyond Organic business full-time.  It’s been a serendipitous ride, and I’m thrilled to know I began treating my body better–more like the temple God designed it to be–before he blessed us with a baby bun in the oven.

So, now that you’ve learned more about my road to reform and seen far more belly than you bargained for, let’s get this post back on track.  Contrary to the lie that’s been promulgated for centuries, I think it’s perfectly healthy and natural to have lazy and procrastinatory tendencies, but allow me to share with you my secret for using them to your advantage:

See, here’s the trick: once you become productive, you become focused on the task(s) at hand which serves as a complete distraction from the laziness you were looking forward to!  In fact, I get so wrapped up in checking off my to-dos that I have to set an alarm to remind myself to eat (a healthy, Beyond Organic) lunch.  Rest assured, if I had started my day by giving into my desire for “only one hour of laziness”, it would have grown into two, three, four hours or more, stuck in front of the “boob tube” and wasting away the day.  But by procrastinating on being lazy, I find the day flies by in a productive, enjoyable fashion.

So if you believe yourself to be a lazy type of person, take it from someone who’s been there (every…single…morning):

There is nothing wrong with procrastination or laziness…

…so long as they are a package deal, opened in that order.

Jenni Smith is a recovering fast food addict and a reformed couch potato who swore she'd never be a distributor... until the day she realized the only thing holding her back from reaching her true potential was her own stubbornness. And maybe a bit of fear. When she finally decided to put on her "big girl pants", Jenni (and her rock star husband, Paul) went from founding distributor to top earner in two years, and is now a Youngevity Vice Chairman Marketing Director. With a 15-year career in marketing and two little girls at home, Jenni raises her kids and her family's income at the same time and is passionate about coaching anyone who has: A) a desire for better health; B) a need for better wealth; C) patience for sass.
View all posts by jenni smith →
This entry was posted in Get Motivated and tagged corporate rat race, fitness, Getting Started, home-based business, motivation. Bookmark the permalink.

4 Responses to Guaranteed Success for the Lazy Procrastinator