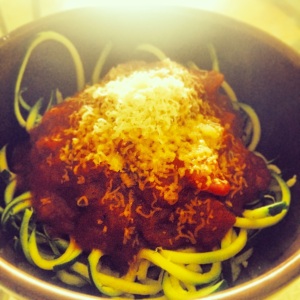 We haven’t been carb-crazy lately, but there’s something about swirling your spoon around a noodle drenched in yummy red sauce, ya know?

With all the fun of spaghetti but none of the processed carbs, we enjoyed an Italian lunch with nothin’ but veggies!

Check it out and thank me later.

Jenni Smith is a recovering fast food addict and a reformed couch potato who swore she'd never be a distributor... until the day she realized the only thing holding her back from reaching her true potential was her own stubbornness. And maybe a bit of fear. When she finally decided to put on her "big girl pants", Jenni (and her rock star husband, Paul) went from founding distributor to top earner in two years, and is now a Youngevity Vice Chairman Marketing Director. With a 15-year career in marketing and two little girls at home, Jenni raises her kids and her family's income at the same time and is passionate about coaching anyone who has: A) a desire for better health; B) a need for better wealth; C) patience for sass.
View all posts by jenni smith →
This entry was posted in Baby / Toddler Recipes, What's Cookin' at the Smith's [Recipes] and tagged steamer basket, zucchini. Bookmark the permalink.